"If the dew is warmed by rays of the sun, not honey
but drugs are produced, heavenly gifts for the eyes,
for ulcers and the internal organs."
-Pliny the Elder, 79 AD
"The Lord hath created medicines out of the earth."
-Ecclesiasticus, 38:4
There proceedeth from their bellies a liquor of
various color, wherein is medicine for man."
-Qu'ran, 16:69 on bees

Let's give it up for the BEES! 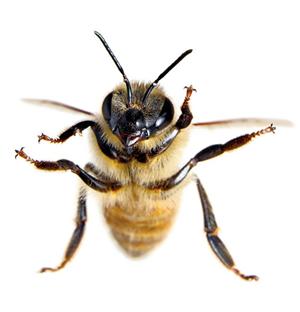 Bees make powerful medicines.
They provide not only honey, but propolis, pollen, royal jelly and venom--all of which are known for their healing properties.

Honey through History
The oldest known intact book of medicine, the Papyrus Ebers (15 BC), houses over 800 remedies--over HALF of which call for honey. Hippocrates employed honey in many of his treatments and once said, "Wine and Honey are held to be the best things for human beings, so long as they are administered appropriately and with moderation to both the well and the sick in accordance with their constitution; they are beneficial both alone and mixed." In Chinese medicine, Shen Nong (2 BC) wrote that honey "helps to kill pain and relieves internal heat and fever and is useful to many diseases. It may be mixed with many herbal medicines. If taken regularly, one's memory may be improved, good health ensues, and one may feel neither too hungry nor decrepit."


What Is It about Honey
That Makes It So Good?
Bees add an enzyme (glucose oxidase) to their honey that breaks down into hydrogen peroxide. The hydrogen peroxide kills bacteria.  Like tiny flying apothecaries, bees choose they plants with which they interact. Different flowers contribute additional antibacterial properties to the honey. Manuka honey from the Tea Tree plant is known to be one of the most potent honeys available. 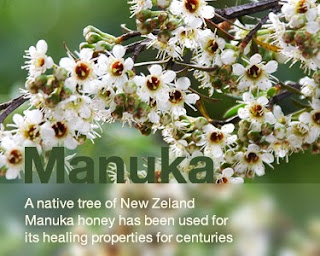 Manuka honey contains another antibacterial agent (called the "Unique Manuka Factor") that is non-hydrogen peroxide based--killing even more invading bacteria.
"Active Manuka Honey" is the only honey that has been tested for its antibacterial properties.
You can read more about Manuka Honey by clicking here and here. Very interesting stuff.

When applied topically, the sugar in honey creates osmotic pressure within certain foreign cell bodies and shrivels them to death. The sugar also feeds the hardworking white blood cells. Goop it on-- the honey creates a thick, sterile bandage. 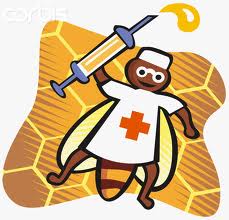 Why Keep Honey in Your Medicine Cabinet?

The list goes on and on...
When buying honey, buy raw and local.
Manuka is imported from New Zealand and more expensive, but I think it's worth it. Click here to see example. 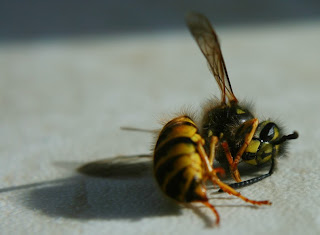 "It's as if the bees have caught the flu..."
30% of the world's bee colonies
were lost last year.

Albert Einstein is attributed with saying,
"If the bee disappeared off the surface of the globe then man would only have four years of life left."

Here's a fascinating TED talk about the decline of the bee population on earth and the detrimental effect that will have on us. Support local bee farming!